Home Cover Feature GRAFFITI TRAVELERS…grab your daypack and join us on holiday!!

CLICK THE PHOTOS AND LINKS TO LEARN MORE ABOUT EACH LOCATION

Of all the things I post on this blog, our travel plans and reports are the most fun to write.  You , my friends….the armchair tourists on our journeys….have no idea how much impact your comments to our “on the road” travel posts mean to Steve and I, and actually add to the fun of the adventure.

ABOVE:  Cassis France (French pronunciation: [kasi, kasis]; Occitan: Cassís) is a commune situated east of Marseille in the administrative department of the Bouches-du-Rhône in the Provence-Alpes-Côte d’Azur region in southern France. It is a popular tourist destination,[1] famous for its cliffs (falaises) and the sheltered inlets called calanques.

My friend Diana and my daughter Liz, and Steve  know more than anyone how fun it is after an exhausting day with blisters on the feet, to hit the internet cafe  or Iphone with a GRAFFITI GOSSIP report from the day and to respond to all your comments from the previous day’s writings.  It’s “comfort food” for a weary traveler’s soul, and I actually can’t wait at the end of the day to seeing who stopped into the blog while we were out.

ABOVE: Khan el-Khalili (Arabic: ??? ????????) is a major souk in the Islamic district of Cairo. The bazaar district is one of Cairo’s main attractions for tourists and Egyptians alike. I asked our guide if she knew of any special bead vendors and she got really excited.  She loves beads too so we are going shopping!!!

In this update, I will  post a few images from websites I’ve found (click photos and Wikipedia blue links to access the sites ) which highlight just a few of the places we are considering visiting along the way.  I will add to our tenative itinerary in future blog posts the next 3 weeks for you to get a taste of how we plan our trips.  Nothing is engraved in stone because we love to “wing it” but a few things like special guides and events that require reservations are good to plan ahead for. 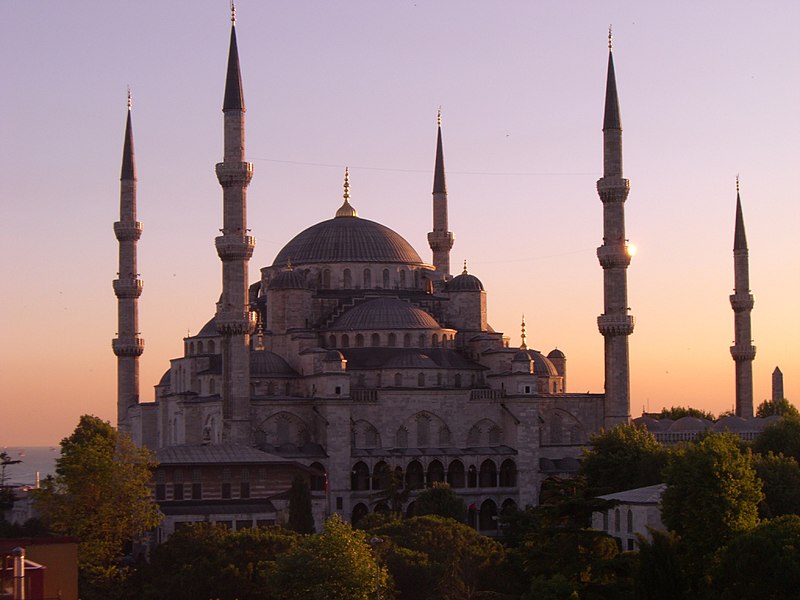 ABOVE: The Sultan Ahmed Mosque (Turkish: Sultanahmet Camii) is the national mosque of Turkey, and is a historical mosque in Istanbul, the largest city in Turkey and the capital of the Ottoman Empire (from 1453 to 1923). The mosque is one of several mosques known as the Blue Mosque for the blue tiles adorning the walls of its interior.

It was built between 1609 and 1616.  Our plan is to visit during the “Call to Prayer” to take in the historic sounds and sites of this age old tradition.  This video convinced me that this is a “do not miss” in Istanbul, Turkey 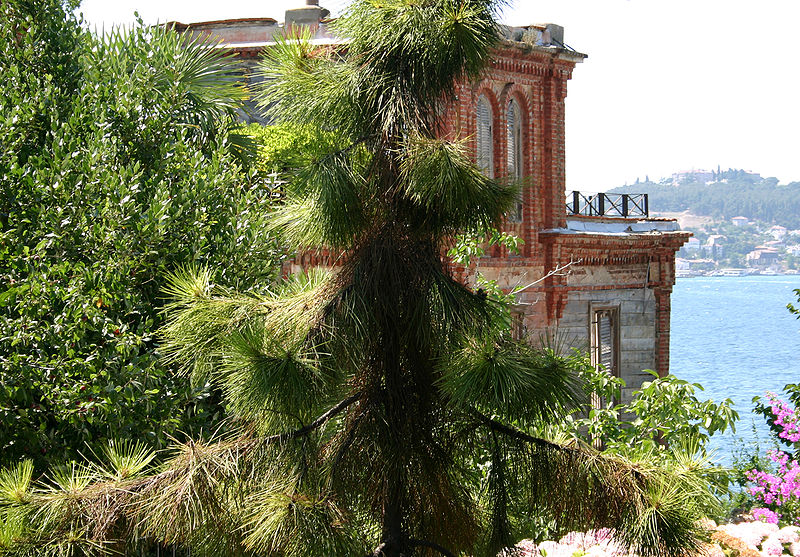 ABOVE: Büyükada Turkey is the biggest of the islands, which is the first address of those who want to have a short break from the crowd and urban life of Istanbul. Büyükada is also the furthest island from Istanbul. (14 sea miles from the Port of Istanbul). The island which stretches in north-south direction is geographically comprised of two hills. (On the north Isa Hill – 164 m., on the south Yücetepe Hill – 202 m.)

The most important element giving the island its peculiar quality is its famous phaetons. In Greek mythology, Phaeton was the son of Helios, who set the earth on fire while attempting to drive the chariot of the sun. Later the word was a 19th century term for a sporty carriage drawn by a single horse.
There are currently 229 of those traditional horse-drawn carriages on Büyükada. Most drivers are first or second generation islanders. Three workshops on the island produce new phaetons. A new phaeton, which takes about forty days to build

Touring the island with these cars which are pulled by two horses is something I am really looking forward to as it gives me a chance to let the scenery go by for me to photograph, vs. walking and clicking, which is harder for me with my eye issues.  Today I’m researching where to eat on this island because I was warned that the main square is not a good place to eat. We like to eat where the locals hang out so it takes a bit of digging up front to find the local digs.

ABOVE: Arles France was established by the Greeks as early as the 6th century BC under the name of Theline. It was captured by the Celtic Salluvii in 535 BC, who renamed it to Arelate. The Romans took the town in 123 BC and expanded it into an important city, with a canal link to the Mediterranean Sea being constructed in 104 BC.

Besides the incredible history in this charming town, we are coming to walk the streets that  Vincent Van Gogh did from 1853-1890.  Steve and I both love Van Gogh so much and have visited sites in Amsterdam and Paris and this is one we would not want to miss.  Our chow “Vincent” has a bit of his ashes in each of these locations !!!  Diana I hope you don’t mind Vinnie visiting Arles too!!! (Diana and I were owned by Vincent together)

Café Terrace at Night, also known as The Café Terrace on the Place du Forum, is an oil painting executed by the Dutch artist Vincent van Gogh on an industrially primed canvas of size 25 (Toile de 25 figure) in Arles, France, mid September 1888. The painting is not signed, but described and mentioned by the artist in his letters on various occasions—and, as well, there is a large pen drawing of the composition which originates from the artist’s estate. 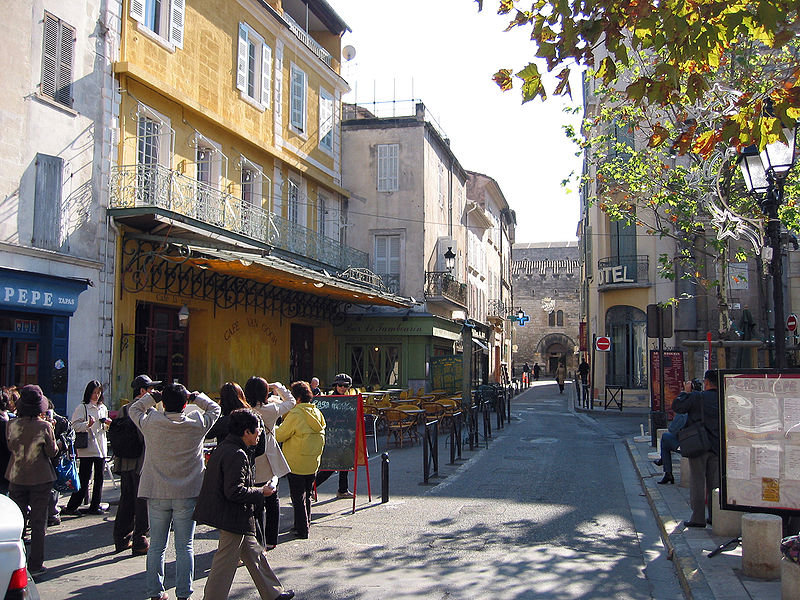 Still today, visitors of the site can take the place at the north eastern corner of the Place du Forum where the artist set up his easel. He looked south towards the artificially lighted terrace of the popular coffee house as well as into the enforced darkness of the rue du Palais leading up to the building structure

If you reject the food, ignore the customs, fear the religion and avoid the people, you might better stay home.  ~James Michener

MUCH MORE TO COME…

IF YOU ARE GETTING GRAFFITI GOSSIP UPDATES YOU WILL ALSO RECEIVE ALL THE TRAVEL UPDATES DURING OUR TRIP BEGINNING SEPTEMBER 18, 2009.

IF YOU ARE NOT A SUBSCRIBER YET, JUST FILL IN YOUR EMAIL IN THE UPPER RIGHT COLUMN OF THE BLOG AND VERIFY YOUR SUBSCRIPTION WITH THE EMAIL YOU WILL RECEIVE.  THATS IT!!  YOU MAY UNSUBSCRIBE AFTER THE TRIP IF YOU ARE NOT INTERESTED IN FURTHER UPDATES